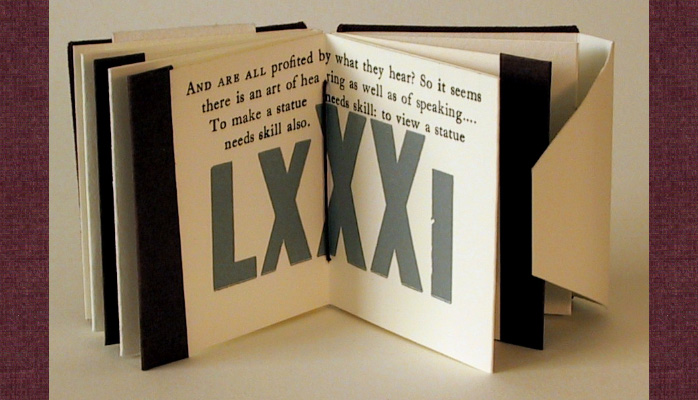 Once Said a Stoic: Epictetus
(words by Epictetus; title and book design by Alisa Golden)

Epictetus was lame, a slave, and although eventually freed, he was exiled by the emperor. Throughout these seemingly difficult situations he maintained a calm demeanor and positive attitude. Although he never wrote, his student Arrian posthumously compiled Epictetus' teachings in what is known as Discourses and a summary called The Enchiridion. Each teaching was given a Roman numeral.

In Once Said a Stoic, six quotes from this first century stoic philosopher are printed in black with Caslon 471 Oldstyle type on Lenox paper and wood type Roman numerals printed in silver. Short paragraph biography in the back. Combination tabbed accordion-fold book with exposed coptic binding. Maroon bookcloth over museum boards. Back page is also a flap that wraps around the front and tucks into a pocket to close the springy book securely.

"Not death or pain is to be feared, but the fear of pain or death."

Home | News | Catalog | Classes | About the Press | Contact
© 2005 Alisa Golden. All rights reserved.
never mind the press is a trademark of Alisa Golden.